To Cairo! Part One 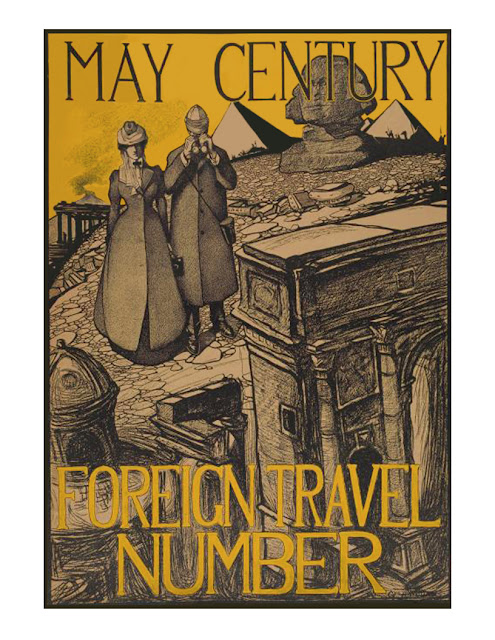 The ladies of the Hangar Club all clustered at the port bow as the steamer set out on her voyage to Cairo. Behind them, New York with its brave, tall buildings, faded over the horizon. They had already outfitted themselves for the journey, and time travel steps had been taken by their traveling companion and scientific advisor, Dr. Algernon Crupper, to ensure they would arrive in Egypt during the coolest season there. 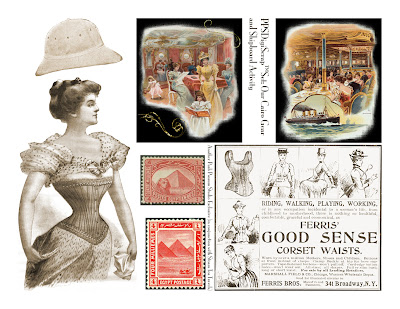 "What are we to do, to pass the time?" one of them muttered.
"Do?" she was answered."Why EAT, of course. Captain's table, eight o'clock, sharp. And someone needs to make sure Dr Crupper is properly dressed. Best bib and tucker."

Dr Crupper did indeed appear at the Captain's table, scrubbed and clean, if somewhat green about the gills. He seemed a little better after the Captain, with a knowing wink, pressed upon him to take a snifter of brandy. It did seem to bring a little colour to his cheeks.

To Cairo by Steamship 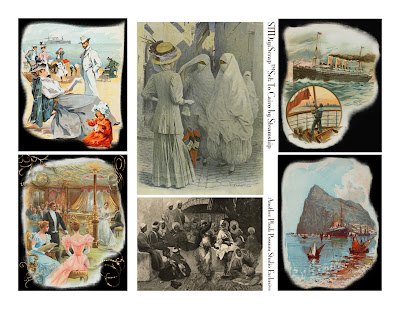 The Doctor addressed one of the many ladies clustered around the table."I say, Hortensia? Could have sworn I  just saw you below decks. All dressed up in goggles and spats. Must be this awful mal de mere."


The crossing of the Atlantic was a long period of misery for Dr Crupper. Most of it he spent in his cabin, where one or another of the ladies would attend him, reading aloud from his notes on Egyptology; his own personal monograph on the 19th Dynasty and some rather dry papers on  recent archaeological digs. Between times, he lay on his bunk and groaned and wished the club had taken an airship.

The steamer stopped at Liverpool, where it was grey and raining despite the season, and filthy coal dust deterred the Hangar Club from more than a cursory glance. The vessel headed south, towards Lisbon and the Bay of Cadiz, where the Hangar Club took the sun on the sandy beaches and Dr Crupper looked surprisingly dashing in his white suit. In the evening, the ship's steam engines were fired up and they sailed towards the Straits of Gibraltar.

"I say!" Dr Crupper offered the ladies a look down his splendidly calibrated spyglass. "You can see the Rock of Gibraltar. Are we stopping?"

There was no answer. He turned around to find he was alone. The Hangar Club had rushed to their cabins to dress up for an afternoon's sight seeing; parasols and reticules at the ready.

They disembarked at Gibraltar as the ship took on passengers bound for India and Ceylon and other far distant places.

Then the ship turned south, for Cairo. The ladies were all anxious to see the sites of Ancient Egypt and the new and bustling city.


Dr Crupper  had reserved an entire floor of the Shepeard's Hotel for the Hangar Club.  They dined well, although one or two of the more adventurous ladies complained there didn't seem to be anything very Egyptian on the menu. 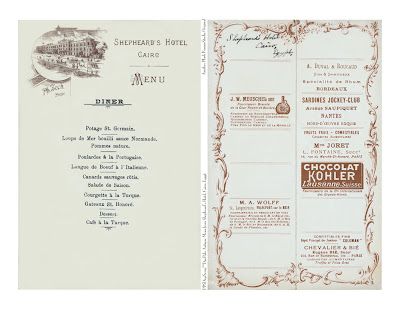 "Algy!" They cried as Dr Crupper made his way to their table. "Where have you been?"

"I've been hoping to see if there is a communication from my new assistant, and while I was out, I thought I saw Hortensia getting into a cab. But you're here! Most confusing. Must be the heat..."

His comments were lost in the outcry from the ladies that they didn't know anything about an assistant! And then there was lot of sighing and face-pulling as Dr Crupper handed out malaria pills. "Come along, ladies. I insist you carry these about your person and take one a day,'"  The ladies eyed the bottles of quinine pills with sour expressions but Dr Crupper would not allow any protest. "I can't have you having an attack of the vapours, like a  gaggle of parlour maids! You are the Hangar Club! You have a reputation to keep. And after all, nobody enjoys having their travel time spoiled by a bout with malaria."  Lavinia muttered that she'd rather take her quinine as tonic water, in a nice glass of gin.


After lunch, the ladies braved the heat, heading for the Souk. Dr Crupper accompanied them, although he did insist on bringing his new camera, which required so much equipment that he was obliged to employ two porters to help him carry it. Every now and then, he would unload the tripod and camera and take another photo. One of the ladies commented it would have been quicker to sketch the scene, than use the cumbersome contraption.

Shepheard's Hotel, the Souk and Beyond... 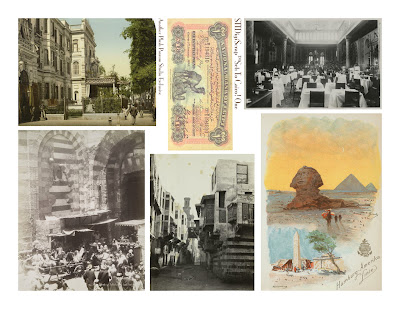 Cairo was all so different and interesting and the ladies stopped frequently as some new and exciting feature was discovered. And then realized they were completely lost. Dr Crupper kept consulting the map he had bought and checking the co-ordinates against his portable binnacle, but confessed he wasn't able to get a reading.

They encountered some Egyptian ladies, travelling through the narrow, shady alleyways. The Egyptian women were shy, but with smiles and gestures, the ladies managed to make themselves understood and were pointed toward the Souk.

"'Lovely ladies. I couldn't quite resolve who was more covered up, them or us."

They had encountered a girl dancing for an audience of rather bored-looking men. Dr Crupper, ever ready to set up his camera, didn't look at all abashed.


"'Fascinating culture," he murmured, adjusting the lens."Must be recorded."

They found the Souk, where an array of wonderful things was for sale. Spices and perfumes. Silks and rugs. Coffee and halva and peppermint tea. The Hangar Club were no strangers to haggling and enjoyed buying strange and exotic items to take home. Hortensia was vigorously bargaining with a lady who was selling hookahs. Suddenly, she grabbed Hortensia's arm, and shoved the hookah into her hands.

Hortensia was startled, but not a lady to turn down a bargain. She hurried back to the hotel, where she began to examine her treasure. Inside the bowl of the hookah was an Egyptian one pound note. And written on the back of the note was a message, in Arabic....

Images (prior to much fiddling by PPS)
courtesy the New York Public Library at nypl.org
and Wikimedia Commons
Posted by Steam Tea Travels at 8:51 AM

Oh! Rose! It's looking wonderful! And people already arriving to have tea, I see!

Yes, indeed, Miss Rabbit!
An interesting group, to be sure!
:)
Rose

I love it!! Is there a reason we can't make the videos full screen? (or is it just me)
Can't wait for the next leg of the trip!

Your story is taking me back in time Rose, how wonderful. Can't help thinking that something is about to happen any minute now, there's got to be a mystery in there somewhere, lol!

bobbie: I've no idea why the YouTube videos don't go full screen once they are embedded in this blog. I've never tried to enlarge one, so can't imagine what's wrong.
Glad you enjoyed the first leg of our journey!
Rose
:)

Ira: Hello! So glad you stopped by!
Yes, there is a mystery. Neither Rhissanna nor I are about to divulge the details, so you'll have to find out more this coming Sunday! LOL
:)

Absolutely wonderful! I'm so glad to have found you!

Julie: Why, thank you! It's kind of you to say so. We're quite pleased to have been found!
:) 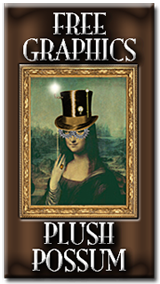 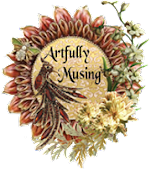